Photo: Party Hardy - Rye Town Supervisor Joseph Edward Carvin Is Too Busy Hanging Out At The Ritz Carlton Hotel In White Plains, Instead Of Fixing The Problems That Are Causing Deficits At Rye Town Park / Oakland Beach.

Rye Town Supervisor Joe Carvin will chaired a meeting of the Rye Town Park Commission last night to discuss how the Carvin administration will deal with another year of mounting losses at Oakland beach, as well as, the latest expensive Carvin RFP (request for proposal) on automated parking and beach access system.

However, some park commission members have said that Supervisor Joe Carvin has put in controls that may prevent or limit the deficit. This is very critical in 2011, because Supervisor Carvin promised that there would be a surplus at Rye Town Park, before his term was up this year.

Commission members have said to prevent a deficit this year the Rye Town budgeted expenses may be cut from $980,000 to $950,000 mainly by cutting employee hours. Security and life guard hours would not be cut.

It is rumored that pre-season park income was almost non-existent for some reason and was about $20,000 less than last year. Park employees say that the beach only made about $1,200 this year on July 3rd compared to $45,000 last year.

Conservative, Democratic, Independent And Republican Voters Are Starting To Say That The Town Of Rye And It's Parks Are Suffering, Because The Joe "AWOL" Carvin Is Too Often Missing And Can't Be Found When Critical Decisions Must Be Made; 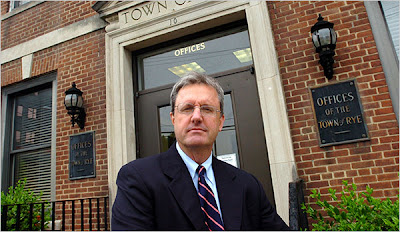 Joe Carvin's Altima Partners investment fund is buying up farmland in Africa and Latin to grow food for export -- a profitable business, with a growing global population and rapidly rising prices. The high-stakes game of real-life Monopoly is leading to a modern colonialism to which many poor countries in African and Latin American countries submit out of necessity.
Every crisis has its winners. A group of them are sitting in Joseph Edward Carvin's Altima Partners LLP's offices in New York.

Confidential Secretary to the Supervisor

Posted by Welcome To Port Chester Roundup - at 5:27 PM No comments: Links to this post

07/20/11 Astorino To Cuomo: Build This Bridge And More News From The Port Chester Topix News Message Board

Posted by Welcome To Port Chester Roundup - at 11:14 AM No comments: Links to this post

07/20/11 Only A Fool Would Pay A Buck To Look In The Westmore News For A Job !!! Here Are Free Port Chester Job Listings From The Daily Port Chester

• Start-up company has opening for an entry-level salesperson.

• Cleaning company is hiring a carpet and upholstery cleaning technician.

• Wholesale jewelry company has openings in sales and administration.

• Bartaco is hiring managers and assistant managers. It also had an opening forkitchen manager/chef.

Posted by Welcome To Port Chester Roundup - at 9:33 AM No comments: Links to this post

The plot of "The Big Bank" -- a musical about a banker who falls in love with the owner of a flower shop he is sent to foreclose on -- could have been plucked from today's headlines.

Instead, it was written and composed 16 years ago by two brothers from Port Chester, N.Y., with help from a Greenwich piano teacher.

The story behind the musical is a bit more timeless. Years after Jacob and Daniel Seligmann had given up on the dream of seeing their creation on stage, and had moved on to separate careers in show business, "The Big Bank" will have its premiere, with 12 performances through the Emerson Theater Collaborative in Mystic from July 21 to 31.

The production has also been accepted by the New York Musical Theatre Festival , a fall festival where such acclaimed Broadway productions as "Next to Normal" and "title of show" have premiered.

The Seligmann brothers had their sights set high when they first started working on "The Big Bank" in 1994, in the house where they grew up. As Jacob, now 36, tells it, the two were watching journalist Charlie Rose interview composer Andrew Lloyd Weber and lyricist Tim Rice , who had collaborated on such hit musicals as "Jesus Christ Superstar" and "Evita."

Daniel, a writer, had just graduated from college and Jacob had finished his freshman year at Brown University in Providence, R.I. Daniel, now 39, turned to his brother at one point and said, "We could do that."

Daniel wrote the book for the musical, drawing from his experience of seeing friends jumping into jobs at investment banks after college, working 70-hour weeks. Jacob was the musician, having taken piano lessons from Stuart Hemingway in his Riverside home, so he came up with the melodies. The two even named the main character, Stuart, after Hemingway.

Hemingway, who lost his vision years ago, taught his students to play piano by having them listen to him, sending them home with recordings instead of sheet music. After Jacob wrote the songs for "The Big Bank," he brought them to his lessons, and Hemingway worked on the piano arrangements.

"He would sing what he wanted and I would play behind it, and it seemed to work pretty well," said Hemingway on a recent afternoon at the Nathaniel Witherell nursing home in Greenwich, where he now lives. "It sort of evolved out."

Later, Jacob made digital recordings of Hemingway playing the musical's score by using a keyboard that connected to his computer.

After the Seligmann brothers finished "The Big Bank," they shopped it around, at one point even meeting with legendary theater producer Harold Prince, who was interested in the musical for a director's workshop. There was even a reading of the play at the Lambs Club in Manhattan, but nothing came of it.

"It was the first real rejection I took really hard as a writer," said Daniel, who eventually moved to Los Angeles and has been working in the film industry as a writer and producer.

A couple of years ago, on a rainy day in New York City, the pair's mother, Michele Seligmann, was sharing a cab with a woman and they got to talking. She was involved with the Emerson Theater Collaborative, and Michele told her about "The Big Bank."

In 2008, as the economic crisis took hold and foreclosures popped up in every city and town, Jacob started thinking about getting "The Big Bank" going again.

"`The Book of Mormon' took forever," he said of the show by South Park creators Trey Parker and Matt Stone, which recently won the Tony Award for Best Musical. "These are monumental projects. The timing has to be right. The timing for `The Big Bank' is perfect."

Daniel said he and his brother used the foreclosure process as a way to easily dramatize what banks do, never foreseeing how close it would come to reality.

"It's funny that I've been absolutely riveted and fascinated by the hypocrisy of investment banks and the government," Daniel said. "I think this is a story that just wants to be told. That's why it's finding the path that it is, even 16 years later. I don't think it would have meant a lot to people back then."

Back when he and Jacob were recording the music for "The Big Bank," Hemingway suggested Old Greenwich resident Stephanie Kies to sing the part of Iris, the flower shop owner. Hemingway had accompanied Kies when she sang at local church services and other venues. What Jacob and Daniel didn't know, however, was that Kies owned the Old Greenwich Flower Shop, which she ended up selling shortly afterward, in 1996.

"I always thought this would happen someday," said Kies of the musical's recent successes.

The men's father, Joel Seligmann, believes "The Big Bank," with its theme of love and kindness winning out over selfishness and greed, has Broadway potential.

"The message isn't just timely, it's for the hope in all of us," he said. "Look, I'm the father, and even great people have fathers."

The achievements are particularly bittersweet for Hemingway, who suffered a stroke several years ago that paralyzed his left side, leaving him unable to play the piano.

Hemingway, who at one point taught 75 students a week, said he considers Jacob one of his most talented pupils.

"I think he could have been a jazz player," Hemingway said.

Jacob has worked for the last 10 years composing music for television, and also teaches piano to his students in the same way Hemingway taught him.

When it was confirmed that "The Big Bank" was going to be performed, Jacob used Hemingway's recordings and other computer software to create sheet music for the show, a painstaking process.

"Hearing the music director now playing, (Hemingway's) like living and breathing through this guy," Jacob said.

Jacob is anticipating a busy fall. The cast party for the Mystic production will be held Aug. 1, and by the next morning, he'll be working full-time in New York, getting the production ready for the New York Musical Theatre Festival.

"For sure Broadway is the goal, and I really think that's where it's going," Jacob said. "It seems so inevitable at this point."

Posted by Welcome To Port Chester Roundup - at 6:46 AM No comments: Links to this post

Posted by Welcome To Port Chester Roundup - at 6:06 AM No comments: Links to this post